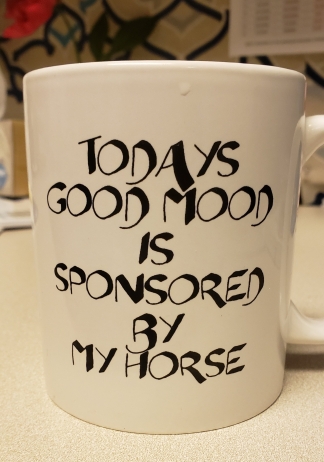 My coffee mug perfectly sums up my day….. my week really. Winifred has had me grinning all week but last night’s lesson has got me on a total high! I will back up a little though and mention the cyclone bomb we had this week. No, I am not making that term up that is actually what the meteorologists called it on the news. We had 60mph winds this past Sunday which made me a bit skeptical about riding my nervous horse. Luckily our indoor is made of concrete so there was no siding to clank around but we do have 2 garage doors on 2 different walls. Those were moving and banging at any given time. Winifred was nervous but he really contained himself. I was so incredibly proud of him at one point when we were walking past the garage door and a particularly nasty gust hit. Win did jump and react more than the other two in the ring but for him, that was a super small reaction so I was proud. He did want to constantly be buddied up to Maestro (Stampy and the Brain). I commented that it was funny that the oldest horse in the ring was looking to the youngest for comfort. Kristen had a different take on the situation. She felt that Winifred was sticking close to Maestro because he knew he was much faster than Maestro so when the monster attacked Maestro would be the sacrifice. LOL

On to even better riding things though. I was really looking forward to my lesson last night because I did not end up doing too much jumping last week. Ever since my surgery, I am very diligent on getting a monthly massage and adjustment. I always get them on Tuesdays and so far the only downside I have had was that a couple of times I was too relaxed. Lol. That actually can be a problem in the saddle though. My chiropractor usually stays away from my surgical spot but this time he pressed down right on it. He also adjusted my hips for the first time since we were talking about how my toes always point out and he said that he could help with that. (Such an equestrian moment, my toes have pointed out my whole life but I only mentioned it because my trainer has been hounding me about them lately.) Like always, I felt great when I left but then about an hour later I had horrible lower back pain. I tried to suck it up to ride but my pain was clearly apparent when TS asked, “Is there something wrong with you today? Why are you riding so weird?” She suggested that I stretch it out by 2-pointed and it helped a bit. When it came time to jump though I could only stand to do a few warmups and a line.

Oops got on a tangent when I was supposed to be talking about my amaze-balls jumping last night! My back was still a bit sore but not like the week prior and I was hell bent on doing more. Horse show season is upon us my friends and I already missed one home show! I am not sure if I will be ready for the March show but last night was a huge step in the right direction. First, TS had set up a nice gymnastic of a trot pole, X, one stride, X, 2 strides, vertical. The trot pole ended up adding an interesting element for Winifred. It really backed him off! This was great though because it forced me to ride 2 sides of my horse in one test. He was so backed off that I had to really push him into the first 2 jumps but then he was ready to run at the third jump and I had to sit back, hold him, and hold my body to make the 2-stride work. We did that a couple times then put our course together. The course had a couple pitfalls that we have been avoiding the past few months, long approach headed home and a diagonal line headed right to the exit. There were 3 of us jumping and for different reasons TS wanted everyone to add but commented to me that depending on how Win jumped in we might not be able to do the add on the diagonal home. OMG, our course was awesome!! The only thing in the course that was not in the plan was that I circled after the long approach to get a calmer trot to go into the combination. TS and I agreed that I could not enter that with the hot horse I had coming straight off that jump. The course ended with the combination to the diagonal home which was set at a 4-stride. Winifred jumped in pretty strong and wanted to go but I sat back and took control and forced him to do a 5!!! Obviously, for the shows, we will do the strides but right now I need to prove to myself and Win that I am in control! TS was so happy with that she was ready for us to be done but I asked if we could do one more challenge to prep for show season.

I can’t believe that it has been months since I have done an oxer. I was avoiding them more out of the cold on my older boy but then it started to become an obstacle in my mind. To avoid him getting too strong in the approach we decided to jump the in of the diagonal then left rollback to the oxer. So yeah, my in was pretty shitty because all I was thinking about was “bitch you better sit back approaching the oxer” and then forgot that I actually had to jump the first jump! I got caught behind and in my attempt to try to keep a softer release I ended up losing my left rein. Ok, folks that is bad enough on a regular horse, but let me explain why that is so much worse on Winifred. Winifred was a very accomplished jumper in the high point of his career (this is where his running comes from) which means that he can turn on a dime! I have done those turns and they are so much fun but his problem is that he is pretty confident that he knows exactly where to go to next and that is much worse when you just jumped a course but are now changing it. Below is a typical conversation between us when we go from a hunter course to an equitation course.

In the air over the jump:

Me: Hey Love we are going to turn left when we land.

Win: Yeah yeah don’t worry I see da jump in front of us.

Me: No bub we are going left to the oxer over there.

Land, I pull HARD left, and attempt to block him with my right leg:

Me: WIN I said LEFT!

Win: This is so awesome mom I bet I can get to that jump in only 3 strides this time! TS was so happy with me last time she is going to love this!

Me: WINIFRED we are doing a rollback!

Win: Come on mom I KNOW that this is our next jump! Did you read the course map???

Me: WINIFRED JOSEPH YOU DO NOT KNOW HOW TO READ A COURSE MAP! We on an equitation course!!!!!

Win: OHHHHHH well why didn’t you say so?!?! I love equitation courses! Bending line next?

After that, any little shift of my body and he is on point. So knowing that is how it typically goes, really think now about the consequences of me dropping my inside rein. But praise Jesus, halleluiah, he listened to my body, turned, and I was able to regain my rein in time for a beautiful soar over the oxer! I swear we were in the air for 30 seconds. Ok, I know it was only like 2 seconds but it was amaze-balls! And let’s face it those 2 seconds where your horse lends you his wings so you can fly are why we deal with all the frustrations, bills, worries, sweat, blood, and tears. Those 2 seconds of perfect flight make up for all of that and the high from that can last for days. I know that I am definitely still on my high! 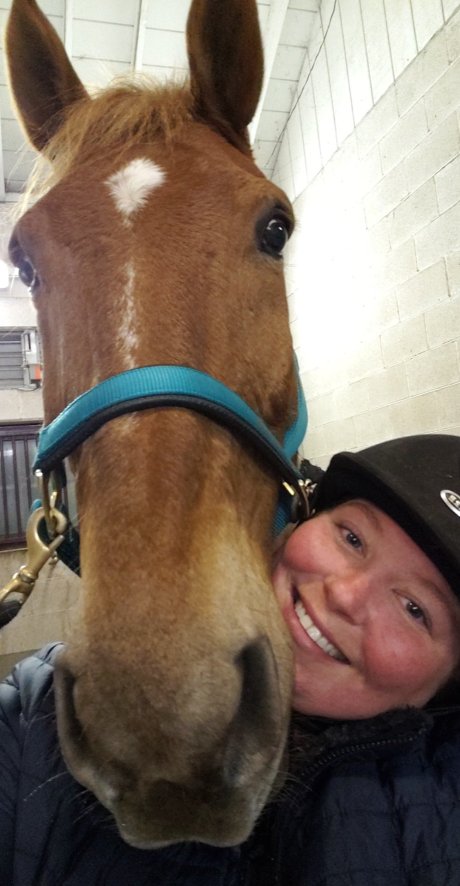