Can this winter be over already???? I know that I just posted on my clinic but that was back in mid-November. Recently the weather has been FRIGID and riding has been tough!

Tried to do a nice photo shoot with him but he had other ideas. 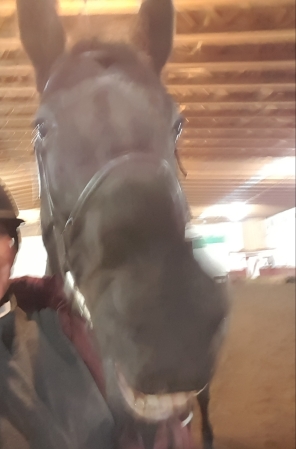 Tried to do a nice photo shoot with him but he had other ideas. Oh Lu….

Winifred has done a little more than Luther but not too much more. We have not been able to jump in a few weeks but we have done some flat work. Win needs to be in a steady program or else all of his pent up energy turns into nervous energy. Even though he has lived in our barn for 3 years his nervous energy makes the indoor seem like a house of horrors to him. This past week I rode him Monday and he was not terrible but Tuesday through Thursday was far too cold to ride. I did get him out for some hand walking and on Thursday I let him run around the indoor with my friend KD’s horse Charlie. Charlie is actually Luther’s pasture mate but I had a brain freeze and thought he was Winifred’s. Oops! The boys did great together though. I expected Winifred to be the crazy one but Charlie took on that roll. Charlie was running around with his tail straight up like an Arabian and would stop to do a guttural snort every so often. Lol! Win just followed him around a little distance behind him. The best part was watching Winifred jump on his own. Why was not I not videoing that?!?!

I rode him on Friday and everything concerned him! For some reason his “concern” gets a lot worse going to the right. Saturday we did a flat lesson and he was phenomenal! He was totally relaxed and we went around on a nice loose rein then Sunday he went back to thinking that Pennywise was going to jump out and get him. Oh Win……

Since we aren’t doing much we have been focusing on lateral movement and transitions. His transitions up are great but his downward transitions need a lot of work. This boy just wants to canter, canter, canter! He has been doing good with this lateral movement except for Sunday for some reason. We have been doing lots of circles including spiraling in and out, moving off the wall then back to it, just going around with his head in or out, and walking triangles. Always open to any other ideas if anyone has any. I have been way too lazy to dissemble jumps to do our ground pole exercise since I would then have to reassemble them and nobody wants to do that in this cold!

This cold has really been affecting Finnley too. He is already a SUPER energetic dog and that is with regular bike riding. It has been too dangerous to spend too much time outside even with his coat on but I have forced myself to take him out for a little bit when it was safe. He has gone on a couple of short walks and has gotten to play with his friends Gus and Cleo. Our barn owner was so nice and let us bring the three of them into the indoor when it was empty. They had so much fun and even jumped a few of the jumps! Finn got to meet the new barn dog Gypsy. She is a super cute beagle basset hound mix. She was not too sure of him at first but it was a little overwhelming to her to have 3 new dogs on her turf looking to meet her. Once we walked her and Finn together away from everyone they settled down and it seems like they are going to be friends. 🙂